For this year Chicago Drawing Art Interchange we decided to start again using the work of the artist Jaume Plensa. The main reason to repeat this subject came when we knew that the MACBA museum of Barcelona decided to do a big exhibition about this artist. The MACBA staff was extremely kind with us from the beginning. They even explained us the works that were going to be showed so we were able to begin us all the information about the show. We specially want to thank the director Ferran Barrenblit and the head of the educative prograns Tonina Cerdà.

For this the second part of the Plensa project we choose to focus on the idea of Mind/Matter. The MACBA museum offered us an incredible journey through the exhibition. Our pupils crossed the museum unable to see the sculptures initially, as you can see in the pictures. The week before the MACBA staff asked us to do a series of meditations and it all worked amazingly in order to create an atmosphere of creativity when we came back to our studio.
We only used two classes to plan the drawings. Some pupils used ipads to try new solutions. 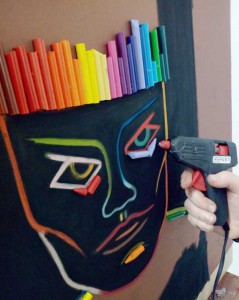 Finally, we create the drawings using basically pastel colors  (all sizes between 50 and 70 cm.): 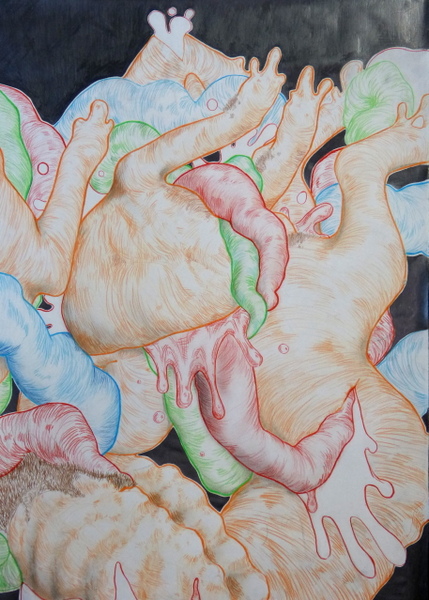 Ariadna Altimira. The mass. My artwork represents the concept of mass and how the essence is found within it. I wanted to show the importance in the essence itself rather than the mass, which could very well be unshaped, but the essence is what gives it meaning. Because of this, my artwork shows the unshaped meaningless mass which, through the colors I’ve used (which take the meaning of essence), gives the mass a meaning. 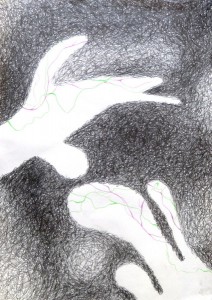 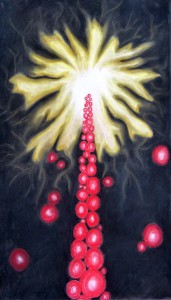 Laura Beltran. Instant. In my piece I tried to portray the image that our neurons leave on our mind when we close our eyes. They leave colorful light shapes with strange structure and they are brief. This could be a metaphor for how the imagination acts in our mind, since they are instant moments (left).  Desire. In this work I tried to reflect how people get carried away or do things to achieve their goals or desires. The white light would be the symbol of desire or what we want to achieve, and the red balls tightly forming a red thread are the people who want to achieve that goal. On the other hand the spheres that move away from the others would be the people who surrender. The interpretation is free, but I have done it with this idea in mind (right). 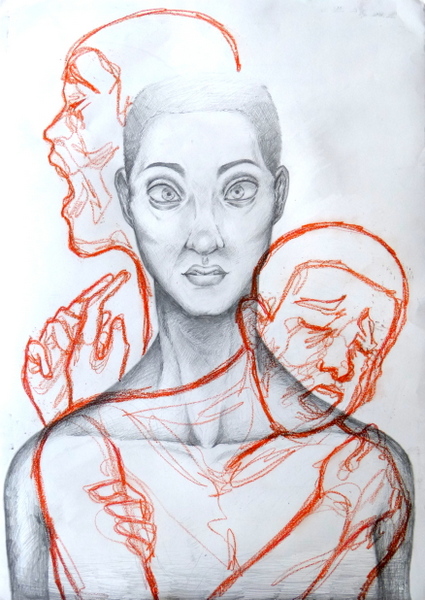 Mayra Vives Pérez. Echo. In this piece I wanted to split mind (the red distortions that come out of the person’s body) and matter (the body, devoid of emotion). The red distortions are supposed to represent the echo of the body’s mind, in chaos due to confusion and paranoia brought by the question of “do we really exist?”. 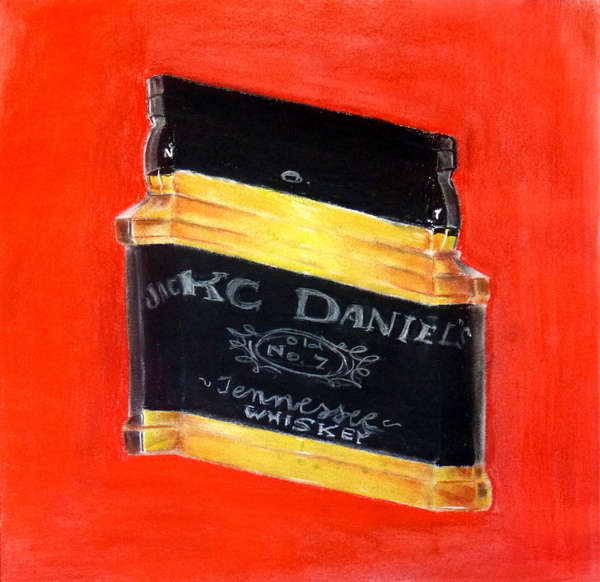 Gerard Estrada Fernández. XY. I decided to create and experiment about matter and dreams on which I can decide about the organization of the particles on a molecular level. So from this point, I could create something normal with a clear structure in front our eyes, but on the inside it’s from a totally different dimension, the dreams.

Indo Casal Pelegri. Beyond. In my piece I had the intention to portray how matter fails to contain all the trascendental power of our minds. To do so, I displayed the first one in the form of a skull: tangible, black and white, and yet disrupted by the abstract force of the mind that flows within it until it eventually rips it apart. Said mind is shown as pure colorful energy, glowing and flowing and taking over the entire paper, leaving matter on a second term. 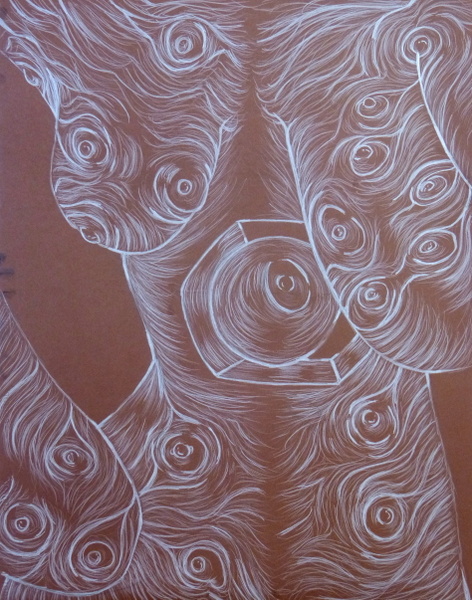 Sam Santaló Muñoz. Artemise. My artwork shows the body of a divine being, covered by breasts and nipples. It represents the beauty of a body affected by gravity, where the breasts and the nipples are the work’s essence. Just like the title of the artwork, I’ve based this body on a strong figure, Artemise, who only went down in history for being a motherly figure instead of being appreciated for who she really was. 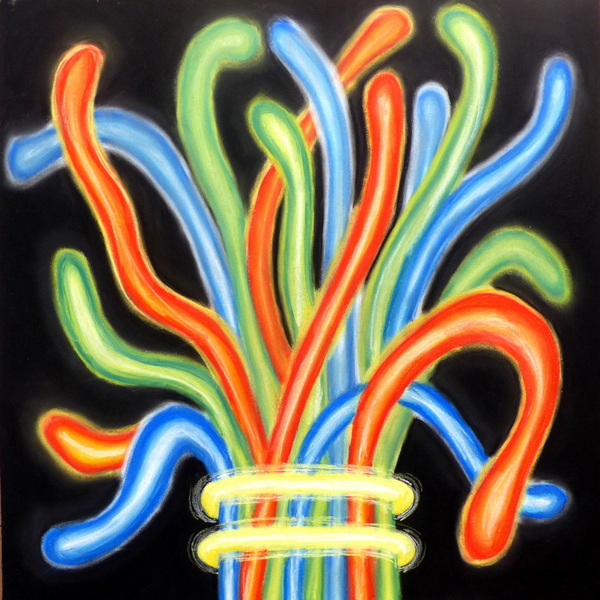 Marta Llurba: Limits. With my piece I wanted to reflect how humanity is. Are we really free? Which are the limits? I think we’re not totally free, there’s a force that keeps us tied, but really this strength just makes us more powerful. We are nothing more than a set of very diverse matters that struggle to know what our own limits are. So this is why I decided to represent this concept with a metaphor, my work is quite abstract, you can see a illuminated and brilliant worms tied by a ring of light, that refers to humanity and how it stays together despite always seeking expansion. 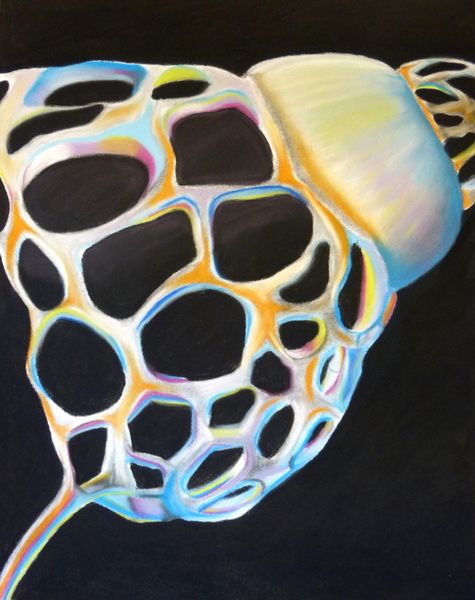 Aina Ortet. Radiolaria. In this artistic work I represented a marine particle. In it, I created on his surface reflections with which I wanted to experience the effect of color and contrasting them with a black background. The particle itself represents the matter and the reflections and the different colors the form and effects of the chemical and luminous reactions that are generated in the matter. This project started with the idea that I had to a priori draw all matter and form as one thing; Chemical reactions, and therefore, temperature. 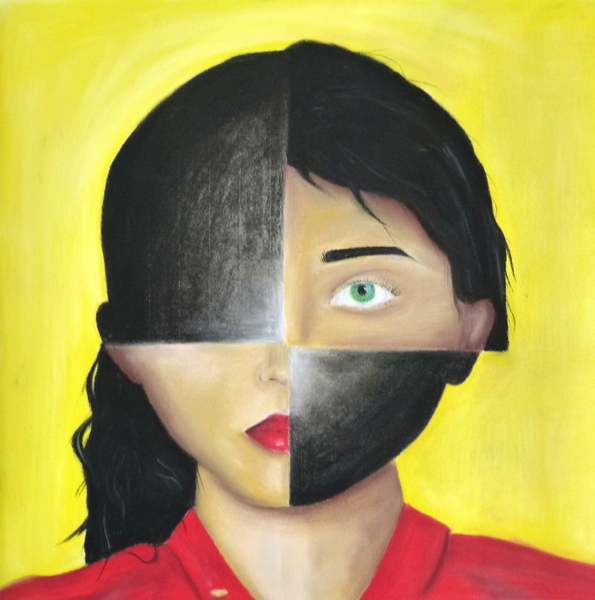 Cesca Montserrat. Full emptiness. My work represents the gap of a same.  So that never we will be able to us reach meet in its entirety. 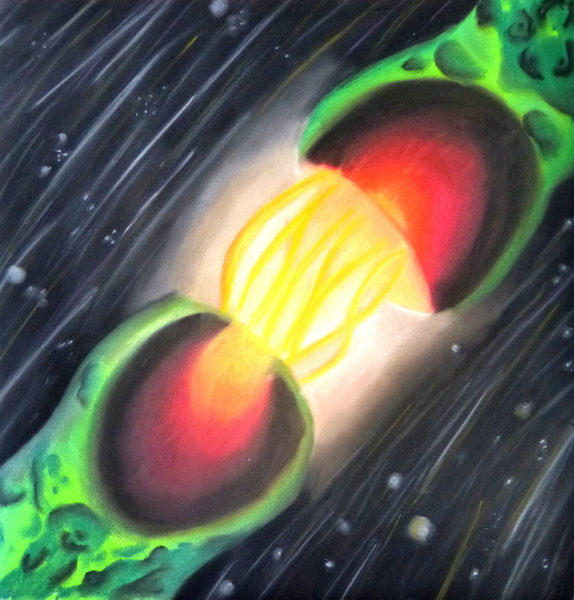 Maria Ledesma Pi. Desplaença. My piece wants to show the greatness and the beauty of something ordinary. In this case I used some ores or minerals that represents the top of the ordinary objects because we can find a stone in everywhere. Starting from this point, we just need to magnify and visualize the object in a particular way, looking the perfection and the beauty of the detail that the object possess. My artwork wants to turn ordinary things like a stone into something beautiful and amazing, in other words, make people see the substance from other perspective and make them feel small and insignificant.

Carolina Santos. A dangerous perfection. My project explain the concept of the power that the human mind has. We have such a dangerous mental capacity that we can build magnificent things and destroy our own habitat unconsciously. In my project I have represented the human mind as a cylindrical sphere, making reference to that perfection. Also somes elements of the sphere come out like breaking that perfection that has, from which life or death can come out. That’s why flowers appear that are totally alive and others that are not. 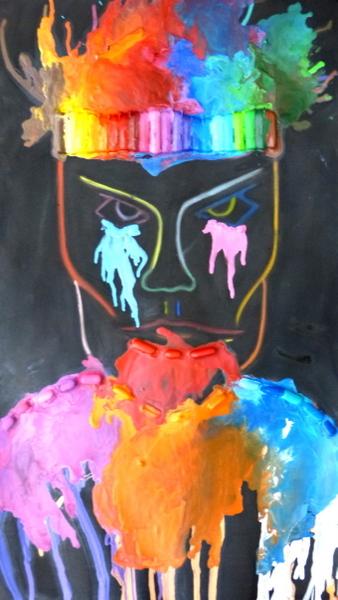 Ruth Espías. Kaleidoscopic waterfalls. My work is a metaphor of what we, humans, can achieve with the power of our minds. The idea, is to reflect the concept of complete freedom as a requirement for us, to become the best version of ourselves. In the piece, you can see a face painted just by lines of different colors, and waterfalls falling from the head, eyes, nose, mouth and neck. The idea of adding kaleidoscopic waterfalls, especially on those parts of the human body, came after thinking about what makes us act differently and make mistakes. Our mind is one of the biggest problems; we tend to imagine the stuff that leads us to failure. Our eyes see what others choose to show them. Our mouth doesn’t usually wait for permission to speak, and our neck is being constantly smothered by society. So the only way we can truly be free? Letting all those parts of our body get rid of. 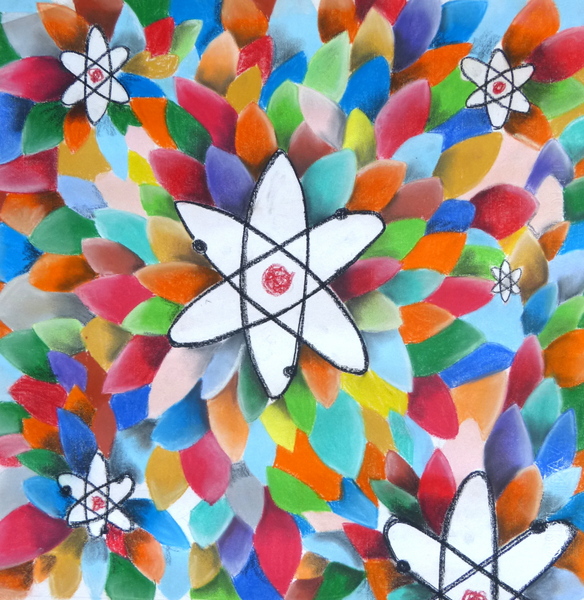 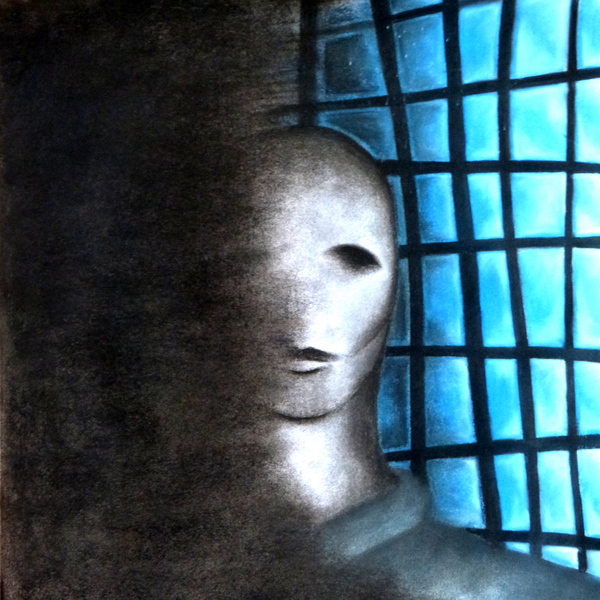 Paula Martin. Vanish. In this work I wanted to represent the subject matter and body through the world of dreams, specifically the disorder of sleep paralysis. This disorder causes the functioning of your physical body to start functioning before the brain, causing that when you open your eyes it seems you woke up but the reality is that you are still in the dream, so you think the dream is real. In my drawing I wanted to represent the moment of this transition from sleep to reality and at the same time recreating a nightmare in one’s own reality.

Alba López Claverol. Dot. This piece is both a performance (in the sense that I’ve had to scribble each square paper and reorganize them) and a drawing. The entire composition represents the concept of the molecular unit in philosophy, meaning that each square alone doesn’t hold a meaning, but when put together, it causes an impression on people. The core of this work is the effort put into causing an impression in existence itself. It explores the concept of not existing unless someone remembers you or the impression you’ve left on them. 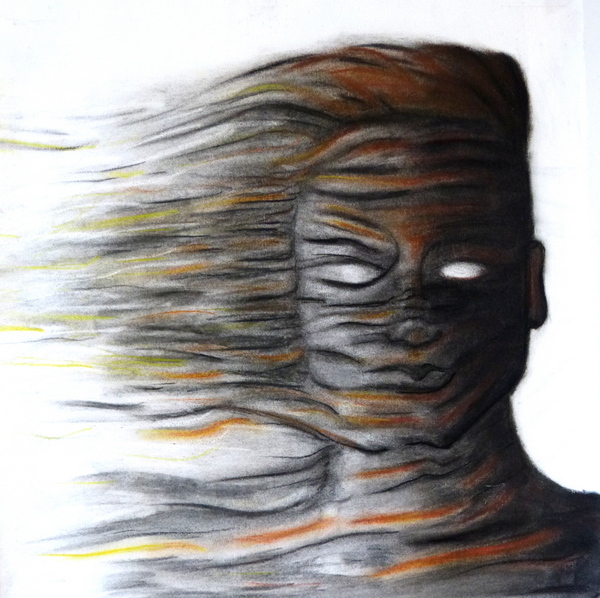 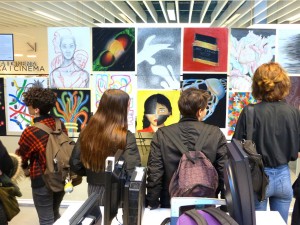 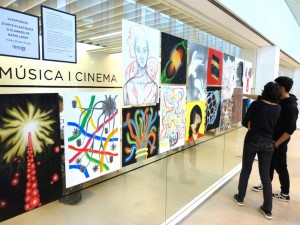 Here you can see a couple of pictures of the exhibition at the Caterina Albert library.
Our pupils did a presention for the general public 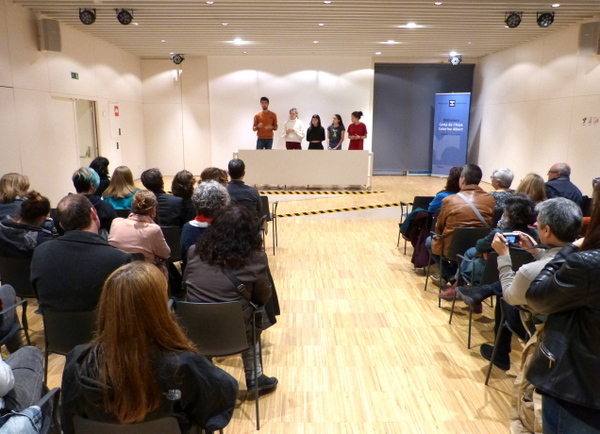